Special Version Taw Waes Suwan Loi Ongk Statuette in Nuea Pragay Rung Rainbow tinted Sacred Alchemical Metals, with gold embellishments on the decorative parts of this Asura King’s Regalia, from the Great Kroo Ba Bunyang Bunyangkaro, of Wat Huay Nam Un, in Lampun. Released in various models and blessed in Grand Buddha Abhiseka at Wat Huay Nam Un on 15th May in 2560 BE in the ‘Ayu Wattana Mongkol’ edition, along with various other kinds of amulets and Bucha statues, including some See Hoo Ha Dta 4 ears 5 eyes Indra God Animist Charms in various sacred metals, Bucha statues of KB Bunyang, Mai Kru wands, 9 Faced Ruesi Hermit Gods (Lersi Gao Hnaa) for professional advancement, and some bracelets with See Hoo Ha Dta Devas.
Taw Waes Suwan is an emanation of the Emperor of the Northern Quarter of the Jadtu Maha Rachiga Celestial Heaven, and is the Lord of Wealth, and Commands all Demons and Asura of the Celestial and Worldly Realms.

Taw Waes Suwan is King of all Demons and Asura Devas, and commander of the minions. He is a Protector of the Dhamma in Thai Buddhism, and is seen standing in and at the gateways to Thai Buddhist Temples around the country, and is one of the four great Kings of the Jadtu Maha Rachiga Celestial Realm, one of the highest celestial realms, where the Asura Dwell, who are very powerful, but also emotional and reactive Deities, with both Benevolent and Malevolent Aspects, and who possess immense magical power.

In both Buddhist and Brahmin Cosmological Pantheon, the four directional points of the compass have a Deity allocated to each direction. The deity allocated as the Lord of the North is “Taw Guwern” (Guberan), or more commonly known as “Taw Waes Suwann” (the word “Taw” meaning “Lord”).

In Buddhist tales and Fables he is known by his Pali name Waes Suwann, or Waisarawan (Sanskrit).In both Thailand’s “Ramayana” and the original Hindu Brahmin Epic “Ramayana”, the name of this Being is “Lord Guberan” (Taw Guberan). Apart from this, The Lord of all Rich Fortunes and the Northern directions has other names, such as Tanesworn, Waisarawan, Yanksaraja, Raaksentorn, Ratanakan, and Aitawita (son of Itawata).

This Kata was given to the Bhikkhus to protect them from the Maras in the forest as they practiced. Protect against Black Magic. Increase Riches. Taw Waes Suwan is also known in China as ‘Chai Sing Hia’ – he is the King of the Northern Quarter of the Asura Realm and is God of Wealth as well as the Commander in chief of all demons, Yaksa, and other forms of Asura Monsters as well as ghosts. To chant his Kata is to have his protection and blessings. 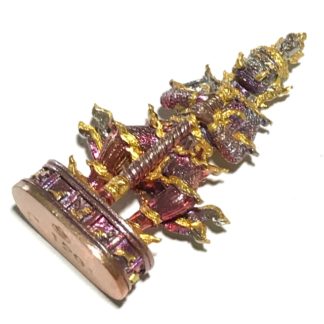