Empowered with the Wicha Tammabandan, performing Incantations in Pasa Gubos Angelic Language (a language used since Vedic Times for over 5000 years to speak with Angelic Beings), with inscriptions made on the sacred powders in 32 different language alphabets (reflecting the Akarn 32 reanimation spell). The amulets were made by Pra Ajarn Song after a stranger appeared with a pickup truck full of earthen and mineral deposits, and presented them at the temple, saying they were meteorite powders and earths from magical places, which are powerful in their own right even without any kind of further empowerment. The man begged to use the sacred earths to make the friendly Alien amulets, and disappeared as mysteriously as he had appeared.

And so Pra Ajarn Song was mystified as to how the donator was and where he came from, and decided to fulfil the strange visitor’s request, by empowering and blessing the sacred earths, and mixing them with his own Puttakun Yantra powders, and empowering them with Invocations in Angelic Language. The amulets were made in normal and Ongk Kroo special versions, with the Ongk Kroo models having three takrut spells inserted into the rear face.

Use the amulet to communicate with Angelic beings or Friendly Aliens from other worlds or dimensions, to ask for assistance ot for whatever it is you wish for or want to communicate or ask them for. No iincantations are needed 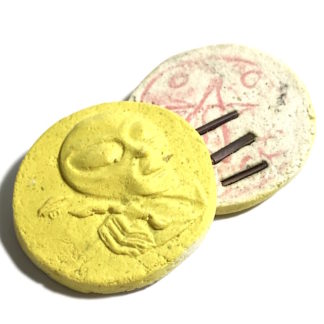