The powders were empowered by Luang Por Sakorn in solitary for 15 days and 15 nights before they were ready for being mixed into sacred clay and pressed into amulets, to be blessed in Buddha Abhiseka and handed out during the Tord Pa Pha Robe Giving Ceremony on the 27th February 2548 BE 10. Pong Prai Kuman Luang Por Sakorn.

Luang Por’s amulets are favored and faithfully revered with hundreds of thousands of devotees around the world who believe in this Great Monk and his amulets. Luang Por Sakorn Passed away in 2013, and since his passing, his in any case Internationally popular amulets have become ever rare to find, as the devotees deplete the remaining stocks of amulets left around the country.

The value of Luang Por Sakorn’s amulets have begun to approach that of some of the mid range priced amulets of his Mentor, Luang Phu Tim, and are expected to continue to increase in both value and rarity continuously at the same very fast pace they have taken in recent years. 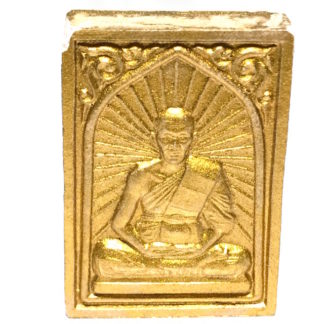