Prai Kuman Tong Taep Jindamani Loi Ongk Brazen Metal Statuette of a Traditional Thai Kuman Tong styled image in sitting position with the Juk Topknot and Jong Graben Pants. Made by Luang Por Sakorn of Wat Nong Grub The Kuman Tong is made from Nuea Nava Loha with Code stamp ‘Na’. The statuette filled with Jindamanee powders and Pong Prai Kuman in the base of the statuette, which is incredibly finely honed with a highly contrasted relief in the details of the clothing and regalia of the Kuman Tong

This particular model is a highly preferred model blessed by the hand of Luang Por Sakorn, and with their interiors filled with the Sacred and Ultra Rare Pong Prai Kuman of Luang Phu Tim, and Sacred Ya Wasana Jinda Manee Powders. This series was the first Kuman Jinda edition released  in 2554 BE, after which a second edition had to be made after almost instant depletion of this first edition, in order to provide a continued repository for devotees who were desperately seeking this particular Jindamanee edition. The statuette has sacred Khom Agkhara spells inscribed on  the amulet.

The rear side of the Kuman Tong has the 4 Elements Invocation ‘Na Ma Pa Ta’. The base on the rear side has the Thai words Wat Nong Grub, and the code ‘Na’ embossed, as a mark of authenticity. Released in 2554 BE in Traimas Buddha Abhiseka ceremony. Traimas means ‘3 Months’ and refers to the 3 month or more rainy season period, where the monks do not travel around and stay in the temples. It is during this time, that monks and masters will spend each evening of the period to chant and empower amulets for release at the end of the rainy season. This is then called ‘Sek Traimas’, meaning ‘Empower for 3 months’. 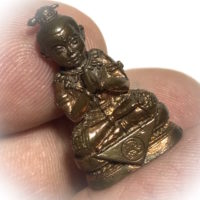 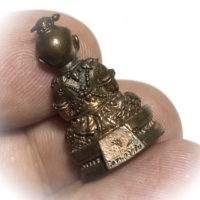 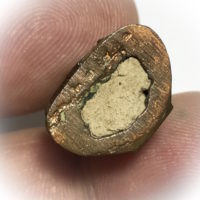 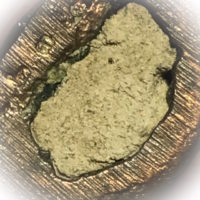 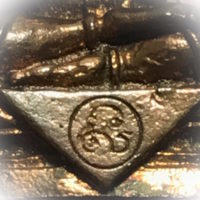 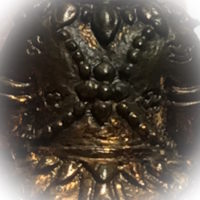 Luang Por Sakorn Passed away in 2013, and since his passing, his in any case Internationally popular amulets have become ever rare to find, as the devotees deplete the remaining stocks of amulets left around the country.

We recommend the amulets of Luang Por Sakorn for their intrinsic value, rarity and certain power, being one of the top ten Gaeji Ajarn Guru master Monks of this last half Century to have brought us the continued lineage sorcery of his mentor the great Luang Phu Tim, and continue and advance the Dtamra Khun Phaen Pong Prai Kuman of Luang Phu Tim, to the point where now since more than a decade, the amulets of Luang Por Sakorn have taken on their own individual niche of high esteem.

Luang Por’s amulets are favored and faithfully revered with hundreds of thousands of devotees around the world who believe in this Great Monk and his amulets.

There were Miracle Tidings in the News One Year after His Passing – Luang Por Sakorn’s Corpse had not deteriorated at all. Thai buddhists consider this to be a sign of a Monk having attained stream entry to the four stages of Enlightenment.