Bia Gae Cowry Shell amulet in Dtua Kroo masterpiece version from the Great Luang Por Sakorn, of Wat Nong Grub. Released in the year 2554 BE after a whole year of empowerment with a special 3 month ‘Traimas’ Blessing during the 2553 Eainy retreats, with LP Sakorn performing Incantations over the amulets in his Kuti in solitary. The Cowry shell is empowered for removing poverty, healing, and protection.

These Bia Gae were created along with the first edition Luang Por Sakorn made in 2553 BE, but were kept for empowerment over time, and only released finally in the year 2554 BE. These Dtua Kroo special versions are larger than the original first edition (released in 2553 BE), and in addition have a leaden yantra foil covering on one side with hand spell inscriptions of Sacred yantra and Khom Agkhara Sanskrit Incantation syllables from Luang Por on the surface, for extra special empowerment, and to seal the power within, preventing influence from external black magick.

The number 32 refers to the 32 components of the Living Body of a Human being, and invokes this Kata Akarn 32 within the Bia through the performance of the 32 Incantations, one for each tooth.

The Bia Gae are composed of the correct formula of Muan Sarn ingredients, including Channa Roeng paste, leaden yantra foil, Channa Roeng Dtai Din and ‘Parort’ liquid Mercury Alchemical metal.  The Bia Gae, have a code number stamp embossed on the leaden Yantra covering. After the Bia Gae were made, they were placed upon a Pan Kroo Bucha tray and flowers were offered, incense was lit, and the first round of Incantations was performed. Then the Mercury was tipped into the palm of his hand and it was empowered with a further incantation and blowing of Magic Spell.

Then Luang Por tilted his hand with the Mercury, and the other hand with the open mouthed Bia shell, and slapped them together, quickly performing the Incantation which forces the mercury to slither sideways defying gravity into the interior of the Bia Gae shell.Then the Channa Roeng Paste was used to cover the Bia, and Leaden Yantra Foil with Khmer spell inscriptions were used to seal the Bia Gae. The Yant Putsoorn (Namo Puttaaya) is inscribed. Luang Por  then kept the Bia Gae for empowqerment during the rainy retreat, and repeatedly performed nightly Incantations upon them, until he felt sure they possessed all Nine Blessings and Powers he intended to Bestow upon his Devotees. 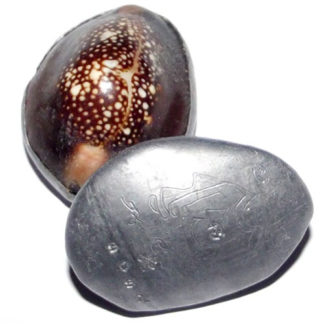