This amulet is a true Collectors Classic, and a Commonly Accepted First Class amulet of the Pim Niyom variety. It has hair from LP Sakorn sprinkled into the Muan Sarn powder base. Made, empowered and released in 2548 BE (2004).

This Pim is made from Nuea Pong Prai Kumarn powders, but also a generous measure of the ultra rare and favored of Pong Graiyasart. This edition of amulets is now extremely rare and becoming ever rarer since the passing away of Luang Por Sakorn, and is expected to slowly rise to the status of those of his Predecessor and Mentor, Luang Phu Tim, of Wat Laharn Rai. 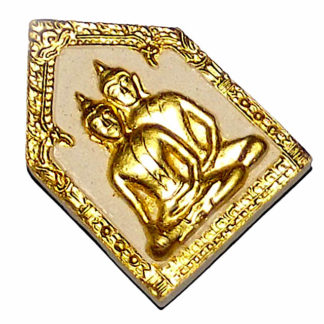